What it takes to be Packaging Line of the Year

In southern Florida, little lies between the resort towns of the western Gulf Coast and the beach communities and world renowned nightlife on the eastern Atlantic side. A good portion is covered in swamp and wetlands and the areas that are inhabitable are filled with pockets of little towns surrounded by crops as far as the eye can see. Immokalee, Fla., is one such town.

Located about an hour's drive from the Gulf of Mexico, the road leading into Immokalee is peppered with produce warehouses and stands. In September 2009, Myles Strohl, recently retired after selling a lucrative software business in Pennsylvania, decided the retired life, while nice, did not provide quite enough stimulation.

He entered the produce business and bought Florida Specialties—a successful grower and bulk shipper of various vegetable products including beans, squash and eggplant. Strohl immediately set his sights on expanding into the value-added retail market.

"We had to set ourselves above and beyond in the competitive produce market," Strohl says. "Value added was exactly what we needed."

He recognized the competitive advantage Florida Specialties would have if its fresh-cut division, Blue Ribbon LLC, could collect fresh produce and have it packaged and ready for sale within 24 hours. He needed a new packaging line to achieve his goal. Within that window, the new line needed to fit collection, triple-washing, bean-trimming, weighing, bag making and filling within this rapid turnaround.

The result was the 2011 PMT Packaging Line of the Year. 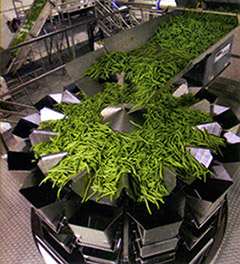 Florida Specialties enlisted the processing and packaging expertise of Heat and Control, Hayward, Calif., to develop an overall packaging solution that would integrate seamlessly with the facility's already established washing and case packing lines. And it had to be spotless.

"I wanted it to be as clean and sanitary as money could buy," Strohl says, comparing the final result to the standards held in hospitals. Heat and Control, working with other vendors, designed the line to efficiently convey, distribute and weigh 2,700 lbs. per hour of beans for retail packaging in 12 oz., 2 lb. and 5 lb. bags using a limited area in an existing building. The building was previously used for storage, and called for quite a bit of tailoring to properly lay the equipment into the existing space, Strohl says.

"Our main responsibility was to take green beans from 500 lb. containers, transport a single flow of beans and distribute them equally to three snippers," says Rick Coleman, sales manager for Heat and Control. "From there, the trimmed green beans were transferred and weighed into a bagmaker."

The line consisted of one Ishida CCW-R-214W-S/70-WP washdown weigher and three FastBack® 260E horizontal motion conveyors—each with a Revolution product distribution gate. This is the first fresh produce application of the FastBack Revolution distribution conveyor system, Coleman says. Previously it was only used for dry and frozen foods.

The FastBack horizontal motion conveyors equipped with Revolution gates were selected for two specific challenges on the line. For the Lyco Manufacturing, Inc., Columbus, Wis., bean trimmers, the gate continuously delivers 900 lbs. per hour of beans to each of three bean trimming machines. Each trimming machine controls the operation of its related Revolution gate to assure a steady supply of beans without under or overfeeding.

The second challenge for the Revolution was in the weighing/bagmaking area. This system provides on-demand product delivery to the Ishida weighers and bagmaker systems from Hayssen, Duncan, S.C. These gate distribution systems are controlled by the bagmakers so each receives a continuous flow of beans without "starving" or over-feeding. This prevents inefficient stop-start operation so weighers and bagmakers operate at maximum productivity. Conveying speed and product volume are fully adjustable so different package sizes can be produced at each weigher/bagger.

To allow for bag film changes, the line allows for two minutes of accumulation using the Fastback upgrade accumulator. Product is then delivered to the weigher by way of a flighted incline conveyor and a Fastback 90E weigher feeder. By April 2010, the line was up and producing product.

Within two months of the finishing touches being completed on Florida Specialties' first line, product demand sparked a desire to spread distribution on a national scale. In July of 2010, it started construction of the new building.

Since the second line was installed in a newly constructed building, all of the parties involved in the first line, under Heat and Control's lead, were able to design the layout with more of a focus on efficiency and not size constraint. This also allowed Florida Specialties the opportunity to utilize an automatic case packing system from Thiele Technologies, Minneapolis, Minn., to keep up with the 12 oz. bags produced at up to 120 bags per minute.

Conveyors and weighers on the second line are mounted on an elevated platform providing complete access to bagmakers and other equipment at groundlevel.

FastBack conveyors are pedestal-mounted to facilitate cleaning of the platform deck. "The conveyors transmit very little vibration," Coleman says. "So a relatively small support platform can be used and they eliminate the need for overhead supports."

"PMT's Packaging Line of the Year Award highlights new and innovative ways consumer goods companies work with equipment suppliers to transform a concept into a consumer product," says Charles D. Yuska, president and CEO of PMT publisher PMMI, which owns and produces the PACK EXPO trade shows. "Florida Specialties collaborated seamlessly with its packaging machinery suppliers to create a new packaging solution. This allowed it to enter an entirely new facet of its industry, taking it from wholesale to retail."

PMT's Packaging Line of the Year Award, presented since 2005, is the packaging industry's most prestigious recognition of packaging line innovation and engineering excellence. The competition is open to lines that have been installed or renovated within the previous 12 months. PMT editors and Editorial Advisory Board members evaluate entries on criteria including the packaging line's contribution to the company's business plan, the level of innovation in packaging line design, the use of floor space/layout of the line design and integration of machinery to optimize productivity.