After a fire, Pretzels Inc. turned lemons into lemonade by seizing the opportunity to rebuild with flexibility and capacity that the previous facility couldn’t have accommodated.

In early June of 2016, Pretzels Inc., a co-manufacturer and private-label supplier of pretzels and other baked or extruded snacks, was dealt what looked like a major setback. At the time, the company had two production facilities and was in the midst of expansion planning for their Canonsburg plant when that facility had a major oven fire break out between shifts. The building was a total loss, and no equipment was salvageable.

The fire rendered the company dark on the market for a popular peanut butter-filled pretzel nugget Canonsburg specialty, and the other facility could not pick up the slack of a peanut-intensive line. Because Pretzels Inc. was one of only two volume suppliers of that specific product in the U.S., time was of the essence, and every dark minute was damaging.

“The fire was June 4, 2016; the family ownership and executive team decided within two days that we were going to rebuild,” says Paul Schaum, COO. We narrowed the field to a 45,000-square-foot shell building—just four walls and a roof that we’d have to alter, but no floor—in Plymouth, Indiana — The existing structure gave us a significant head start that got us back to market sooner.” 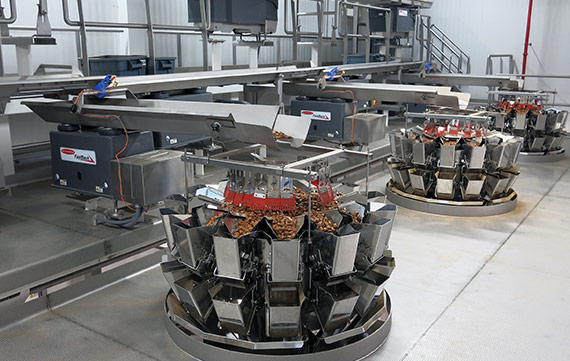 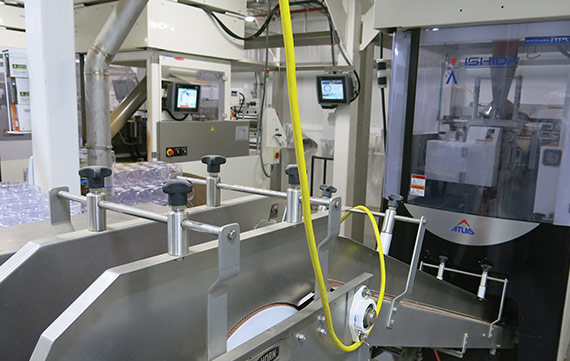 After product on three of the scales is weighed, it is dropped into one of three Ishida Atlas baggers.

Pretzels Inc. only makes one item in Plymouth—the peanut butter-filled pretzel nugget—and the company maintains its own Harvest Road brand of extruded snacks and pretzels, but 85% of its business is in co-manufacturing and co-packing for other well-known national and private-label brands.

This translates into a slew of different package formats and sizes and means that the packaging line has to be extremely flexible and changeover-friendly. The package formats include pouches ranging from 10 to 28 oz, blow-molded barrels ranging from 18 to 24 oz, plus bulk cases and totes of product, up to 600 lbs, that are destined for mixing with other ingredients at customer facilities.

With these unique requirements in mind, Schaum found himself with the unusual task of equipping a new facility from scratch without the burden of any legacy pieces. With 35 years of experience in equipping and operating food production and packaging facilities, Schaum had lots of ideas, existing relationships, and experience from which to draw. He considers the Plymouth buildout as the culmination of a career’s worth of accumulated knowledge. He turned to Heat and Control to assist, and to act as primary supplier and integrator for the packaging project.

As product leaves the baking room overhead and enters the packaging room’s mezzanine, it immediately is fed onto a Heat and Control FastBack horizontal motion conveyor system so that it can cool while traveling. The mezzanine is carefully air conditioned and controlled, so by the time the product switches back twice in the FastBack, it has cooled to an important threshold. Gentle product handling on the FastBack is key in keeping the hot peanut butter-filled pretzels from rupturing and leaking their hot, viscous contents into the downstream equipment or into pouches and barrels. Sufficiently cooled product is fed into one of four Heat and Control supplied Ishida combination scales and also on the mezzanine.

After product on three of the scales is weighed, it is dropped into one of three Ishida Atlas baggers, complete with Ishida’s Integrated Total Packaging Solutions system, positioned underneath. Or, weighed product is diverted from the baggers, instead leaving the scales in a custom filling tube that drops product into the 24-oz blow-molded barrels. Product can also be diverted back onto FastBack decks on the lower level for bulk filling totes and other volume packages destined for future mixing.

On the product side, the company has added band cut and twisted pretzels to the Plymouth plant portfolio and has expanded product offerings and certifications to include gluten-free products.

Reprinted from Packaging World, March 2018
MATT REYNOLDS EDITOR
(The following has been excerpted)